If you’re truly passionate about aviation, then you must have been to a museum dedicated to aeroplanes at least once in your life, haven’t you?

There are hundreds of them around the world. Aviation, aerospace, war, science and technology museums satisfy the curiosity of flying enthusiasts of all ages.

These are our TOP 10 unmissable museums!

Gianni Caproni Museum of Aeronautics, Trento, Italy. Founded in 1927 by engineer and entrepreneur Giovanni Battista Caproni, it’s the oldest Italian aviation museum. Its artefacts include a rib of a Wright biplane from the early 1900s, a wide collection of futurist aeropainting canvases, to which we have already dedicated an article, as well as dozens of aeroplanes designed and produced by Caproni himself, all housed in a building occupying more than 1400 square metres (15,000 square feet).

Royal Air Force Museum, London, UK. Located in North London and dedicated to the British air force. When it first opened in 1972 it only had 36 aeroplanes, but today it houses a wide collection of more than 130 planes. The museum owns rarities such as the V-Bombers: the nuclear bombers converted into strategic bombers that took an active part in the Suez Crisis and in the Falklands war.

Deutsches Museum, Munich, Germany. Famous for being the biggest museum dedicated to science and technology in the world. Every year, 1.3 million visitors visit this huge building located on an island in the middle of the Isar river near Gärtnerplatz to admire the many permanent exhibits, including the one dedicated to aviation. There are not only aeroplanes, but also airships, helicopters and hot-air balloons in a display that tells you all about the history of aviation. Don’t miss it!

Muzeum Lotnictwa Polskiego w Krakowie, Krakow, Poland. The Polish Aviation Museum is considered by the enthusiasts to be a real gem, boasting a collection of more than 200 examples. The museum hosts unique models, including some German Albatross planes from the early 1900s and several Yakovlev and Sukhoi Su planes designed between the 1940s and the 1960s in the Soviet Union.

National Museum of the United States Air Force, Ohio, USA. Free for more than one million visitors each year, the air force museum is the oldest in the world (it opened in 1923) and hosts a section called “Hall of Fame” entirely dedicated to prominent figures in US aviation. It also houses an unmissable collection of uniforms and the legendary presidential aeroplanes known as “Air Force One”.

Musée de l’air et de l’espace, Paris, France. The museum stands on an area of the Paris-Le Bourget airport and hosts the largest collection of civil aviation aircraft and planes belonging to the French air force. You can even admire two models of the mythological Aérospatiale-BAC Concorde, more commonly known as Concorde, the supersonic airplane that connected Paris to New York in only three and a half hours until the early 2000s.

Pima Air & Space Museum, Tucson, Arizona. Opened in 1976, this large complex of hangars is next to the Davis-Monthan Air Force Base and is considered one of the biggest museums in this field not to be funded by the government. The permanent exhibit includes a strategic reconnaissance Lockheed SR-71 Blackbird aircraft and a Boeing B-29 Superfortress (the same type of bomber as Enola Gay and Bockscar).

Museum of Flight, Seattle, USA. Standing within King County International Airport, known as Boeing Field, near Seattle, this important non-profit museum is also known for its peculiar architecture, unique, brave installations and for the important renovations that expand the collection each year. The “Red Barn” also belongs to the museum, which is a historical building from the early 1900s sold for 1 dollar to Port of Seattle by William E. Boeing.

Chinese Aviation Museum, Beijing, China. This incredible museum is partially on a hillside and partially inside a cavern dug into Mount Datangshan in the North of Beijing. The permanent exhibit displays more than 200 aeroplanes, mainly belonging to the period of the Korean War and the Cold War, but visitors can also see accurate replicas of aeroplanes from the early 1900s.

Intrepid Sea, Air & Space Museum, New York, USA. Located in Manhattan on Dock 86 near 46th Street, the museum was founded in 1982 to save the USS Intrepid CV-11 aircraft carrier that was set to be demolished. This museum is the only one of its kind and inside you can find Concorde aeroplanes, helicopters from the Vietnam War, but the star of the show is the Enterprise, the first Space Shuttle built by NASA.

Wherever you are in the world, make sure you visit a museum dedicated to flight. The magnificence of engineering in the aviation field can truly be considered art.

If you’re travelling with children, be aware that this will be one of those activities they’ll remember forever… 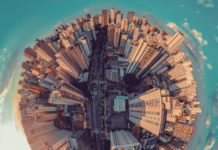